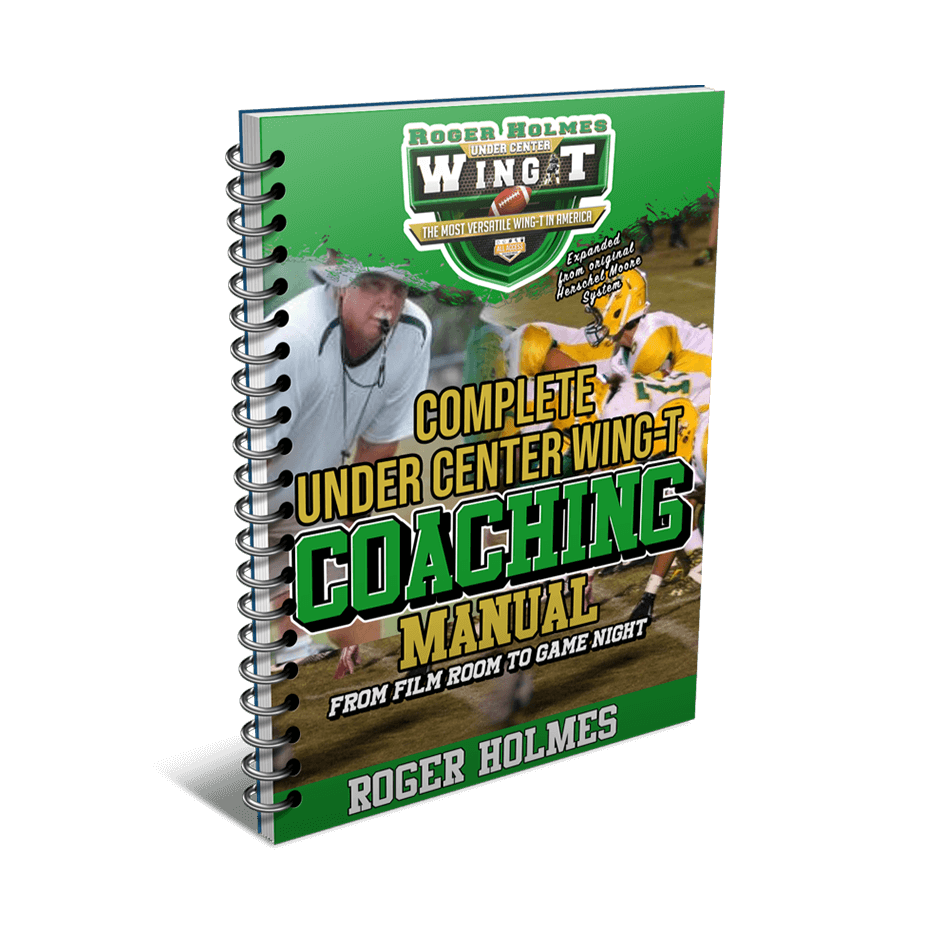 Buy both the physical and digital book together and SAVE $30 !

This is the COMPLETE Manual (300 pages)

DISCLAIMER: This is NOT a downloadable product.  We can ship you a physical book to your doorstep or you can view the digital book on this website. It contains Vol 1: Run; Vol 2: Drills; Vol 3: Game Planning The manual goes in the SAME order as the videos…so you can watch the video with the book. This manual is a systematic way to teach the Wing T Offense based on the system developed by college coach and Tennessee Hall-of-Famer Herschel Moore. Moore is also credited for developing the Jet Sweep and making it a staple of high school and college offenses east of the Mississippi River. Tubby Raymond themselves went to Moore to learn about the Jet sweep. Most teams run Delaware’s Wing-T by the book, with only 3-4 basic series, never jumping into unbalanced formations, and always using the same blocking schemes. Traditional Wing-T teams also do not pass the ball often. The Holmes system has the ability to pass the ball more the years you have a QB who can throw, or run an expanded option game the years your QB is a runner. Holmes also added the midline and the veer and loves using unbalanced formations. SECT ONE: FOUNDATION & FRAMEWORK The evolution of the system by Moore and Holmes, followed by learning the roots of the Wing-T system in order to truly understand the “why” behind the play calls and drills. Holmes details the type of player he looks for in each position, then goes thru all the formations, shifts, & trades that have been the key to Holmes setting multiple Georgia scoring records and having the 3rd leading rushing team in the nation. SECT TWO RUN GAME Every traditional Wing-T family is covered: Buck; Belly; Down, Counter & Power. There is also Midline and Veer / Jet & Rocket to attack the edges & ustiliaze a running QB. SECT THREE: PASS GAME This book has a complete Pass Section showing you how to attack each coverage. Holmes’ play action pass game is much more expansive than most Wing-T offenses and his use of 3-step and sprint out only further opens up the running game. His simple pass protection schemes are easy to install in practices that devote the majority of the time to the running game. PASS PROTECTION schemes that require very little practice time; QUICK passing game that gives your athletes the ball in space; SPRINT OUT off Jet motion putting edge defenders in conflict with the QB run threat. SECT FOUR: DRILLS & PRACTICE You can have the most complete, well thought out offensive system that football has ever seen and none of it will matter if YOU CAN’T TEACH IT TO YOUR PLAYERS!!! Maximize your practice time. Practice fast, efficient, and physical. A very organized coaching staff who can “coach on the fly” and run practices at high tempos. It also requires “MASS TEACHING” where players are constantly getting reps and not standing in lines. SECT FIVE: GAME PLANNING and SCOUTING ¨ Detailed explanations of what to look for when watching opponent’s film. ¨ Flow charts of “If-Then” statements using plays that are most effective vs defenses. ¨ How to call the plays on Friday night so that the defense is in conflict. Roger Holmes has been doing this for more than 30 years and as AD, has hired and mentored hundreds of coaches in multiple sports. Learn from Holmes on how to find and train coaches. Holmes shows you how he delegates year-round duties for every coach, including the in-season tasks during weekend film break down to Friday night assignments

Take a sneak peek inside the book...

Get the book as part of this system

Want to get a membership instead?