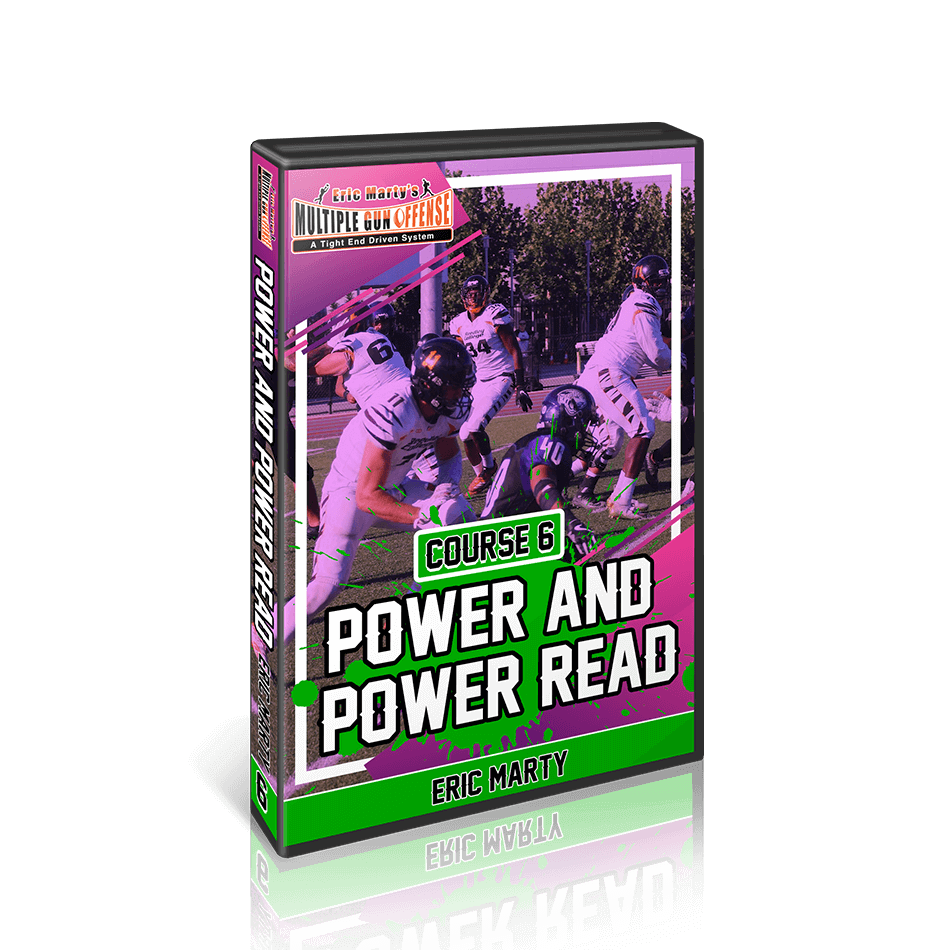 Do You Play Schools Bigger Than You?

Can’t Block the D-1 End With the Booster Prez Son?

THEN YOU NEED POWER READ !!!

Buy this course
Categories Multiple Gun Offense, OFFENSE, Running Game, Spread, SYSTEMS Tags course3, Eric Marty
“If you can’t block ‘em, read ‘em.” POWER READ is the so-called Inverted Veer and has been the weapon of choice for Cam Newton, RG3, and now Lamar Jackson, Deshaun Watson, and Jalen Hurts. It evolved from the Zone Read, which the QB reads an unblocked defender on the backside. But reading backside & having the QB go in the opposite direction of the RB was missing a great part of option football, which was to read a frontside defender. The POWER READ solves that dilemma because it reads an unblocked defender on the frontside, while sending both the RB and QB in same direction, but on inverted paths: the RB goes outside while the QB dives inside. POWER & POWER READ are two plays in one because both use the simple POWER blocking scheme: OL use angles & double teams to cave down the defense & leave the edge defender unblocked. Great for small schools who cannot invest the time into teaching combo blocks with 2-way players. Great vs blitzing. Easy to teach because you just block whomever is on your track. This unblocked defender can be kicked out (POWER)….or read by the QB (POWER READ). The kickout player can be a FB, pulling Guard, or Sniffer/TE/Wing coming across the formation. On POWER READ this same player pulls up into the hold to lead block for the QB. The End is in total conflict: Squeeze to take on the kickout & let the RB run around him Contain the sweeping RB and let the QB dive inside of him. These two plays allow you to take advantage of athletes at the skill positions and use your smaller, more athletic lineman - to your advantage. As defenses have evolved, any good SYSTEM has answers. The MULTIPLE GUN SYSTEM will run it with fly sweep motion or add additional blockers at the point of attack. Coach Marty begins by going over the blocking schemes: Over, Under, Odd, and 33 Stack defenses. The MULTIPLE GUN OFFENSE is a shotgun, fast pace, no-huddle offense: Gun, Pistol, & Under Center…. Coach has both Empty and I-Back cutups They hand the ball off to a RB or a Fly Sweeper No TE. with a TE. Two TE Great detail about the TE rules, even covering 2-tight end formations to be even more devastating. He demonstrates the footwork but primarily uses a TON of endzone film to teach the timing & mesh of the RB & QB. All this endzone footage with Hi-Def camera will teach you the read progression for the QB. If you've ever wanted to run the power read in your offense, or enhance the version of the power read you're currently running, then this video
1 Introduction to Power
2 Run Game Logistics
3 Offensive Line Calls on the Field
4 Wrist Band Play Calls
5 Blocking Power vs Under Front
6 Blocking Power vs Over Front
7 Rules on Power vs Odd Front
8 TE Rules on Power
9 RB Rules on Power
10 Closure on Power
11 GAME FILM Power vs Even
12 GAME FILM Power vs playside 1-tech
13 GAME FILM Power vs inside shade of TE
14 GAME FILM Power vs 44 Cover 3
15 GAME FILM Pistol Power vs Odd
16 GAME FILM Power Under Center I Back
17 GAME FILM Power to multiple TE vs blitzing defense
18 GAME FILM Motion an extra blocker
19 GAME FILM Trust the Puller
20 GAME FILM Bad Execution on Power
21 Power Read
22 H back Responsibilities
23 Rules and Footwork for Power Read
24 Power Read Game Film
25 GAME FILM Pwr Read to perimeter
26 GAME FILM Pwr Read to Fly Back
27 Power Read Game Film out of Empty
28 Power Read Game Film out of diamond
29 GAME FILM More Power Read out of Diamond
30 GAME FILM Pwr Read vs Penetration
31 Closing