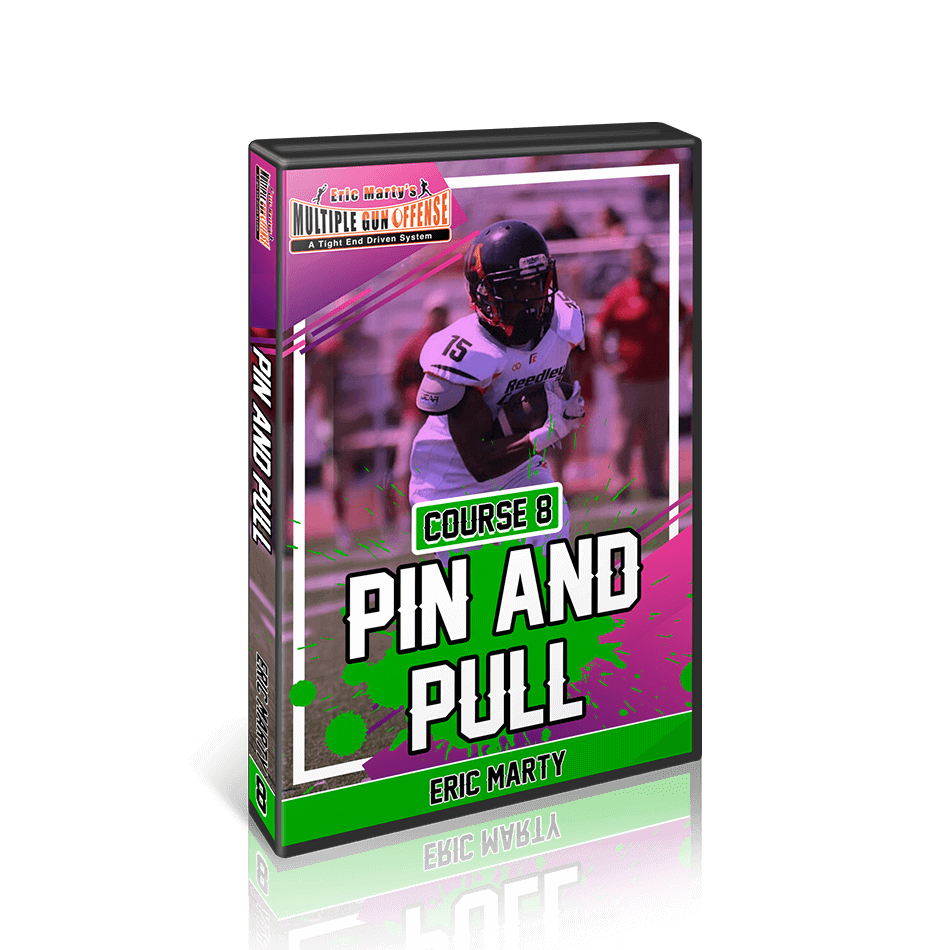 Pin and pull concepts have become increasingly popular in the last 5 years.

Why? It’s easy to implement!

Buy this course
Categories Multiple Gun Offense, OFFENSE, Running Game, Spread, SYSTEMS Tags course3, Eric Marty
Similar to how zone, gap and power schemes work – the pin & pull scheme has a set of rules which allow for lineman to communicate with each other to execute the best possible blocking scenario. The base rules for the pin & pull system are as such: If uncovered, pull play-side Down blocks fill for the pulling lineman, typically in the back-side gap (which tend to be an easier leverage block) Running backs follow the pulling lineman for added downfield blocking support The pin and pull system looks similar to the outside zone play, as it still has some of the same characteristics, such as arc releasing and reach blocking. The RB also has the same aiming point on both PIN & PULL and Outside Zone. However, in the pin-pull sweep, the down blocks give linemen better blocking angles instead of the reach and run technique used in a typical outside zone play. The pin and pull starts up front, with the ease it presents offensive linemen. There can be as many as 3 linemen pulling !!! It’s easy to understand for the linemen. WANT TO RUN RPOs?? The biggest advantage is that no linemen are downfield immediately. That provides roughly 1.5 seconds for the quarterback before the linemen even consider leaving the line of scrimmage. Since the team can run the ball anytime it needs to, the offense is always right if the QB makes correct reads that QB can always take off and run, or pass over the top if the defender comes up as run support.
1 Pin Pull Introduction
2 Run Game Logistics
3 Offensive Line Calls on the Field
4 Wrist Band Play Calls
5 Pin Pull vs Over Front
6 Pin Pull vs Under Front
7 Pin Pull vs Odd Front
8 Pin Pull Game Film
9 RB Toss using Pin Pull - Game Film
10 Using Motion on Pin Pull - Game Film
11 3X1 Running to the Boundary - Game Film 1:46
12 Pin Pull away from the Trips side - Game Film3:05
13 11-12 Personnel Pin Pull - Game Film
14 Pin Pull Closing