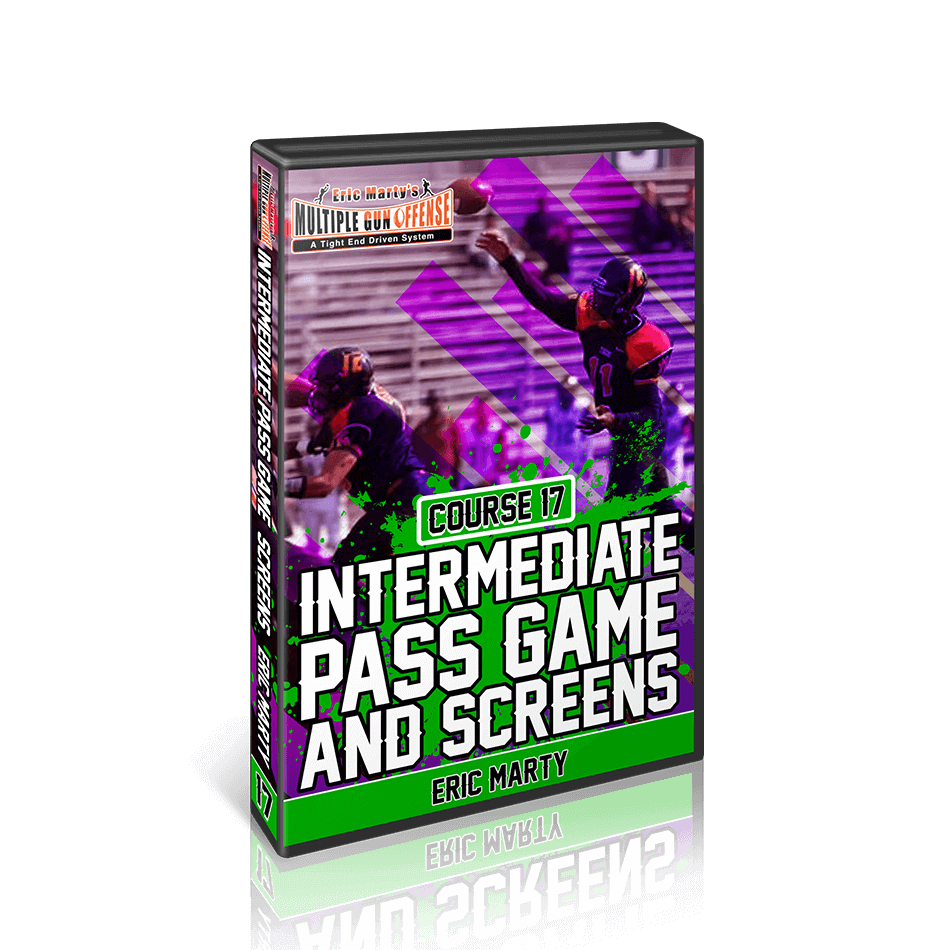 The intermediate drop back passing game is a huge weapon for any offense. The ability to drop back and get a 10 yard completion on 1st down will jump start a drive, or keep one alive on third down!

Buy this course
Categories Multiple Gun Offense, SYSTEMS Tags course3, Eric Marty, RPOs
Coach Marty’s quarterbacks have finished 2nd and 5th in the state of California (out of 68 teams) in passing efficiency the last two years because of the high percentage concepts Reedley College employees for its quarterbacks. Additionally he will show you how to adapt concepts to multiple TE formations as well as condensed and compressed WR formations. This will allow you to run and get good at a small number of quality pass concepts but running them out of a number of formations. Furthermore, the ability to run intermediate dropback out of the same formations you like to run the ball only further stresses a defense. Coach Marty will take you through his favorite dropback concepts as well as the rules and reads for the quarterback in order to achieve maximum efficiency. Screens can be the great equalizer in football. When faced with a dominant defensive line or a pressure heavy defense, screening that defense early in the game can be the difference. Worried that you can’t block em? Screen em! Worried about the blitz? Screen em! Worried about your offensive line? Screen em! Coach Marty will take you through the concepts, rules, and techniques for their RB and WR screens. Whether it’s an early down touch to your best WR, or a 3rd and long call trying to steal a first down – RB and WR screens are great compliments to any offense!
1 Introduction
2 DOUBLE CURL SMASH
3 CUCU Concept Explained
4 CUCU 1 - High Filter
5 CUCU 2 - High Filter
6 CUCU Flipped
7 CHECK vs 1-High
8 CUCU Out of Trips
9 Gamefilm CUCU vs 1-High
10 Game Film CUCU All Curls
11 Gamefilm CUCU from TE/Wing
12 Gamefilm CUCU to TE with Curl Flat
13 Game film Motion to CUCU
14 CUCU from Trips
15 Game film Curl Flat Mirror
16 Gamefilm Condensed Set
17 Double Post Wheel
18 Gamefilm Into the Boundary