Create conflicts for defenders with run-stop assignments
Know what to look for when making pre-snap reads
Adjust your patterns to beat the coverage
Listen to the veteran coach explain why the Wing-T CAN pass the ball.

The powerful run game forces defenses into 1-safety shells and freezes Linebackers.
The threat of Midline & Veer prevents them from playing man-to-man.
This makes it easy to get the 2 receivers and BOTH wings into any 4-receiver pass concept that you want.
The QB calls the coverage in the snap count

Overaggressive secondary support and plugging linebackers can make it difficult to move the ball on the ground. The Wing-T passing game is designed to hit those areas covered by defenders whose immediate assignments must be to control the ground game.

Waggle and boot-leg – Waggle passes are thrown off of the Buck or Speed sweep fake.
The blocking scheme looks the same as the run play, providing a bit of deception.
This is an excellent scheme to get your best running back out in the flat, making it a long hand-off. Included are “called” patterns to take advantage of defensive mismatches.
run/pass option
Learn the patterns and blocking schemes for every play against even and odd fronts. Discover pre-snap reads and specific things to look for to most effectively attack the defense, such as: Finding the weakest defender, hot reads, finding the MLB and adjusting patterns to beat the coverage.

As a bonus, you will receive a copy of the Power Point presentation.

Every offense needs a run/pass balance. These pass plays will help you stretch the defense vertically and create assignment conflicts for your opponents.

Scroll down and see how many different formations that Coach Holmes lethal Wing T attack throws the ball out of. 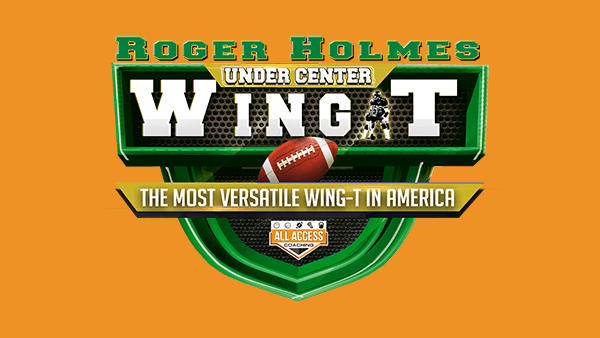